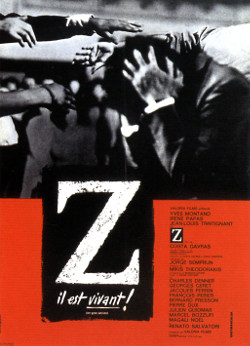 This is a movie about Greece in the years preceding the coup d’état of 1967 when pro-fascist military junta, known as “The dictatorship of the colonels”, took over the government.

The year is 1963 and senior police officers, with the help of the extreme right, organize murder of a leftist politician who was supposed to speak at a rally of anti-war movement, advocating nuclear disarmament and Greece leaving the NATO. The following investigation will further increase tensions in an unstoppable spiral of cover-ups, disillusionment, intimidation, rage, repression and resistance.

The core of the Z’s story is dramatization of political murder of the Grigoris Lambrakis, a member of the Greek parliament, left-wing politician, athlete and physician who fought against militarism and for nuclear disarmament. He was killed by right-wingers in the way described in the movie. His murder was followed by a huge public condemnation and popular rage. His funeral in Athens turned into a mass demonstration against right-wing government with the participation of over 500.000 people.

The investigation led by Christos Sartzetakis revealed deep interconnection of the police and army with pro-fascist organizations. Sartzetakis become a symbol of integrity for the way he conducted the investigation, defied pressures and rejected cover-ups. After the military junta took over in 1967, he spent a year in a military prison.

Since the murder of Lambrakis in 1963, through military junta of 1967 until the fall of the dictatorship in 1974, most popular graffiti in Greece was a big letter Z, short for Zi (He lives!), a slogan that summarized not only the protest against murder of Lambrakis, but the will to fight against the military dictatorship and opposition to the entire system established in 1949 after the defeat of the communists in the Greek Civil War (1946-1949).

Based on actual events.