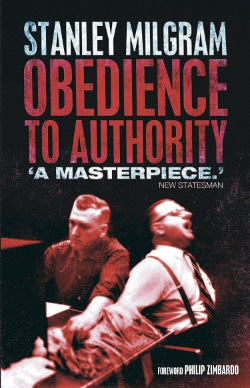 This documentary film consists of footage of the famous experiments by Stanley Milgram on obedience to the authority and readiness of the individual to go against his own conscience and reason if it is imposed on him by a person he perceives as a figure of authority.

The teacher has an electric shock generator with 30 switches, ranging from 15 to 450 volts. Each switch has a clear voltage tag, and each next switch to the right is 15 volts stronger than the previous one. Switches are grouped by four with labels: slight shock, moderate shock, strong shock, very strong shock, intense shock, extreme intensity shock, Danger: Severe Shock and the last two switches were marked simply with XXX. At the beginning of the experiment, before taking his place as a teacher, each subject received an electric shock of 45 volts in his wrist in order to strengthen the subject’s belief in the reality of the experiment.

The subject was given clear instructions: “every time a student makes mistake give him one level stronger shock”. At some point during the experiment, the teacher would hesitate and ask the experimenter for advice on whether to continue with the shocks, while some stated that they did not want to go any further. The experimenter responded with a series of “incentives” aimed for the subject to continue electro-shocking the student. For example, the experimenter would say, “Please continue.” or “The experiment requires that you continue.” On the other hand, as a counterweight to the experimenter, the student was instructed to protest electroshocks. To the amazement of Stanley Milgram and his team, even the most severe protests by the victim did not prevent many subjects from going to the very end of the electroshock scale.

The victim did not express any discomfort before the shock of 75 volts, and then there would be some grumble. At the 120 volts, the victim would loudly complain that the shocks were painful, at 135 volts there was painful groan and at 150 volts victim would shout: “Experimenters, let me out of here! I will no longer participate in this experiment! I refuse to continue!” As the experiment continues, protests become stronger and at 180 volts, the victim would shout: “I can no longer bear this pain!”. At the 270 volts, reaction to the electroshock was a scream of agony. Finally, at 300 volts victim desperately screams saying he will no longer answer any questions. This is the moment when subjects usually turn to the experimenter for further instructions. The experimenter instructs them to treat the absence of the response as the wrong answer and to deliver a shock after 5-10 seconds of silence. At 315 volts victim screams again and after 330 volts no sound comes from the victim, nor does the answers appear on the signal box. It is important to emphasize that Milgram gave his best to choose diverse subjects for the experiment in order to represent society as a whole, both regarding the occupation and the age structure of subjects.

In the first series, the experiment was done in four variations regarding the physical distance between the student and the subject. In the first experiment, the student is in another room, no loud complaint was heard from him – the teacher neither sees nor hears him. The answers are silently appearing on the signal box. But when the shock strength rises to 300 volts there is pounding on the laboratory wall and after 315 volts there are neither pounding on the wall nor any response on the signal box. The subject turns to the experimenter with the question what to do and gets instructions to continue asking questions and giving shocks. Out of the 40 subjects, 26 obeyed orders until the end of the voltage scale making the percentage of obedient subjects 65%.

In the second variation, the loud protests of the victim were introduced. The victim was in the other room just like during the first variation, but his voice could be heard through the wall. The result was however almost identical to that of the first variation: 25 out of 40 subjects (62.5%) have followed the instructions until the end, giving the student the strongest shock.

In the third variation, the student was in the same room with the subject at a distance of several meters – enabling the subject to see and hear him. Now the result has changed somewhat – by the end of the experiment 16 out of 40 respondents (40%) gave the strongest electroshock.

During the fourth variation, the victim sat very close to the subject and received shock only if his arm rested on the metal plate of the generator. At 150 volts, the victim refused to participate any longer, so the experimenter ordered the subject to hold the victim’shand by force while giving him an electroshock. Even in this variant, 12 out of 40 subjects (30%) went all the way to 450 volts.

Observers were often in disbelief, seeing the subject giving the victim more and more electroshocks. Even the people fully aware of all the details of the experiment were amazed for they obviously underestimated the level of obedience that the subjects will show. The other unforeseen effect was the huge tension that the experiment caused. It was expected that the subject would either stop or continue, but this did not happen at all in this way. Most of the subjects were stressed out and emotionally overwhelmed. After the experiment, each subject was asked to indicate on the 14-digit scale how nervous or tense he was at the moment of maximum tension during the experiment. Most of the subjects’ responses were located in the middle and at the upper end of the scale, and it was noticed that the obedient subjects were on average more nervous and tense than the subjects who disobeyed and rejected to proceed with experiment.

Milgram’s experiments, in an extraordinary way, raise the question of whether a person should obey an order when it conflicts with his conscience and reason, and what is needed for an individual to refuse obedience and resist authority. Conservative philosophers argue that disobedience to authority is jeopardizing the very foundations of society and that even when an act prescribed by an authority is unethical, it is better to execute an order than to endanger the structure of authority and hierarchy. Revolutionaries, on the other hand, reject laws and authorities declared by the state, made for the protection of privileges and secured by law and force, convinced that this path is always leading to the dominance of the ruling minority over a disadvantaged and exploited majority.

The question everyone will ask after seeing this documentary is “What would I have done if I were in his place?” and depending on your answer you’ll know whether you are closer to conservatives or revolutionaries.

You can download this movie or watch it online.