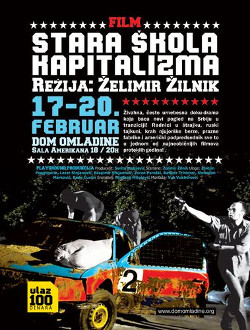 The main protagonists of The Old School of Capitalism are workers, victims of privatization and “losers of transition” on the one hand, and, on the other hand, the new capitalists, who have bought their companies for pennies.

Now, combine this explosive mixture characteristic for the first half of the 2000s, with a group of anarchists who decide to show their class solidarity by kidnapping the bosses and bringing them to the factory to answer to the workers they ruined. It is a winning combination of the naked truth, satire and tragedy in which Žilnik shows the true nature of the neoliberal transition in Serbia.

In essence, this is a movie without actors. The vast majority of actors are non-professionals, most of whom were real life factory workers before the privatization. Žilnik takes it a step further by not only enlisting workers on strike to appear as workers on strike, but by hiring capitalists to perform as capitalists, and real-life anarchists to complete his narrative in the role of anarchists.

Besides filmed movie scenes, there’s a lot of authentic documentary material, as well as hybrid situations where the “actors” are placed in the documentary environment. For example, workers on strike are acting as themselves, while they participate in trade union protests in Belgrade, where they retell other protestors about fictional events in the film as if they really happened. While discussing these “events” in an authentic documentary environment, the boundary between reality and fiction is gradually fading.

The same approach is applied with the dialogues. Since actors in the film represent the same positions they represent in real life, there was no written dialogue on the shooting. Everyone says what he really thinks and acts from his actual political position. This explains why the class conflict is so realistic.

It is particularly interesting to see ― with a ten-year distance ― how empty the neoliberal narrative is, and how easily and swiftly it established complete hegemony in the Serbian society.

It’s the narrative the capitalists in the film used to pacify and disorient the workers. Keywords – euro-integrations, foreign investors, transition – are actually codes for de-industrialization and devastation of the society, accompanied by systematic violence of large proportions and total plunder of social and state property.

In addition, we clearly see that in these circumstances the working class of Serbia was defeated in advance by being defeated ideologically. Mainstream trade unions accepted and reproduced the narrative of the ruling class, placing themselves in the service of privatization and often openly sabotaging the interests of workers. The working class in Serbia did not have a political articulation of its own class position and its own class interests. There wasn’t a single mass workers’ organization capable of leading a wide confrontation with the ruling class that organized the plunder of social property and conducted a shock therapy that pushed a huge number of working people into total poverty.

The Old School of Capitalism has been particularly popular in France as the showing of the film coincided with actual cases of real-life kidnappings of bosses by workers due to great discontent and social turmoil caused by the global economic crisis of 2008.