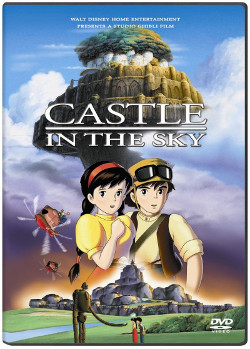 Air pirates, army and government agents wants to abduct Sheeta, a girl with mysterious necklace with crystal pendant. She meets boy by the name of Pazu who plans to construct a plane and set off in search for the flying city of Laputa. During the movie we learn that in the past mankind mastered the technology which enabled construction of flying cities, but after an unnamed disaster survivors continued to live on the ground. The story of this anime is very easygoing and tender, but at the same time it opens up very serious issues concerning the relationship of man and civilization towards nature, while rethinking the essence of modern development and what is usually accepted as progress.

It’s easy to notice similarity between the shape of the central tree that dominates Laputa, a symbol of prosperity, harmony and security, and the atomic mushroom created by the main weapon of this flying city. On the example of Laputa we can expose fundamental contradictions of imperialism / world system: Laputa is a paradise for those who live in it (in the centre of the world system), while at the same time it’s bringing destruction to those who live on the ground (on the periphery of the world system). Equally important contradiction can be also seen in relation of the civilization towards the planet: while we are hypocritically promoting recycling and separating the glass, plastic and paper, at the same time corporations annually cut down between three and six billion trees, without any serious social resistance or critique.

Laputa shows that harmful effects of technology are consequences of the choice of those who control the technology to use it in this way, or to simply ignore warnings and its harmful aspects. They appropriate benefits of technology for themselves, while transferring (externalizing) harm and problems to the rest of society. Miyazaki, the master of animation who grew up in postwar Japan, is careful not to opt for one of the sides in the false dilemma “technology or nature” and uses the metaphor of Laputa to construct a positive reference point against which we can critically observe our society.

The name Laputa comes from Swift’s novel Gulliver’s Travels, where exists a flying island of the same name whose residents use their technology for political domination. Political will for domination through technological superiority marked not only the twentieth century, but also of the previous millennia of civilization development. Laputa sends us the message that a sustainable civilization must renounce war as a way of life, and especially imperialism as inherently destructive social form. Laputa creates a longing in us to realise a balance between nature and technology – a society that will achieve symbiotic unity of the ecosphere and the technosphere.