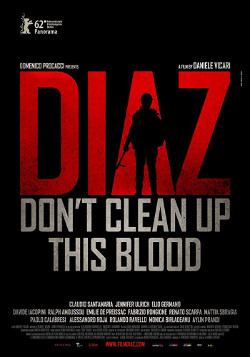 In July of 2001, over 200.000 people took to the streets of Genoa in protest against a meeting of the G8 – the group of the worlds’ eight most powerful industrial countries whose summit decisions were to have a global impact on the world. In the aftermath of the protest, there were hundreds of injured, and 23-year-old activist Carlo Giuliani was killed when he confronted a Carabinieri vehicle. He was shot with a firearm and was ran over twice by a police Land Rover.

Day after this big anti-globalist protests in Genoa, the police organized a night raid on the Diaz school, where the temporary headquarters of the Genoa Social Forum was located, alongside with Indymedia ― an independent media organization, as well as activist lawyers who provided free legal services to protest participants and collected documentation on the police brutality during the protests. At the moment when 500 members of the police and carabinieri stormed the building, there were around one hundred people sleeping inside, among them many journalists and young people who came from different European countries to take part in the protest.

The film relies on documentary material and depicts these events extremely realistically, especially the atrocious police beating of everyone they came across in the building, seriously wounding many people, causing some to sustain life-critical injuries and even coma. Those who did not end up on the life support in the hospital were arrested and transferred to a police barracks where they were abused and brutally tortured for several more days.

In addition to extreme brutality against activists, police destroyed a large amount of computer and media equipment, took all hard drives and destroyed all cameras they found in the building. After that, police officers went on to set up a false evidence campaign aiming to present this school as a black block stronghold, as well as an improvised hospital for people with existing injuries from the protests.

It is important to understand that this attack wasn’t accidental in any way. It was planned at the highest levels of police and government. Besides destroying computer equipment and evidence against the police, the goal was to criminalize the movement and instigate a media lynching, but also to deeply traumatize a large number of activists and thus passivize or break the protest movement.

The gruesome police violence during the Diaz raid that is presented can be compared with the cult film “The Strawberry Statement“, which covers the Columbia University protests of 1968 and the brutal intervention of the US Police and National Guard.

Particularly interesting is the fact that afterward no police officer was tried for torture, because in 2001 the Italian law did not recognize torture as a criminal offense. Movie scenes of humiliation and torture that took place after the transfer of the arrestees into the police barracks are irresistibly reminiscent of films about military-fascist dictatorships in Latin America. It’s the same politics, the same method, the same interests.

This film should be a kind of a lesson to anyone involved in any protest or social movements. Know what to expect if a protest actually jeopardizes someone’s interests – in the sense that every social conflict is part of the struggle between social classes. Although this struggle is mainly of low intensity, contended to individual strikes and protests, if a movement actually threatens the interests of the ruling class, the conflict will soon turn into a class war in which the ruling class won’t choose the means, nor heed to victims.

It is therefore crucial to understand the class nature of the society we live in, and the implications it has. One certainly shouldn’t be naive and think that the state and the police have anything to do with law or justice.

This is one of the films that everyone should watch. Based on actual events.

You can download this movie or watch it online.